Studio space is such a diverse thing, from the large and beautifully functional and aesthetically pleasing, the kind featured in magazines and then …. the other kind.  Insert a smile and a wink.

Creating space, I think would be a pretty wonderful thing if all bits and pieces of the universal plan fell together and the opportunity presented. My painting aunt worked in the small space of the sewing room in her farm family home putting out pieces that became iconic prairie symbols and hang throughout the world.  She did have a studio addition built to her specifications in later life, I am not sure if a painting ever completed itself in that space, if so it would be one of the last ones. Too much pressure?  Maybe too much separation between her and the rest of the house and family I am not sure but a switched seemed to flip.

All painters seem to agree light is a gift, strong steady light is one I have yet to experience but think would be a good thing. There are a  collection of sites that peek inside of artists studio’s on social media, some further categorized into a section for studios with pets! I like this one, it feels familiar. 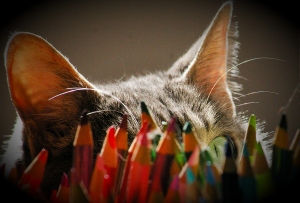 For me a huge gift has been  having a space, albeit a small over stuffed one that allows me to leave everything out, with an unfinished floor that is starting to look like a Jackson Pollock influenced work. The afternoon light makes it impossible as it streams through and flows over the drafting table and easel. It pulls me in the spring time with the pink and white peony bushes that bloom right outside the window where bluebells on long arms bob beneath their weighted stems. Last summer little brown, our least fearful resident bear liked to stand and peer inside which was so lovely and sometimes a tad alarming when my brain processed we are separated by a screen even though I think I am inside!

When the afternoon sun is strong, the cats find their way to the drawing table and If I am foolhardy enough to have left work in progress or an uncovered palette unattended it will be the ground on which they nap or wander. What can I say? I like to be in the flow of family life. A longtime kitchen painter, I have thought about how a separate studio would be. Larger, mmm shelves and a drying rack, storage, that would be a treat (soon a necessity). The question is – would I show up as readily as I do when I can stumble in, coffee in hand, pajamas on form, bare feet, uncombed hair, if it looked like work – would I show up?  For now it remains just a hypothetical. For now I give close second looks for pet hair, try to make fewer spills, keep the industrial paper towel always in reach, and bring the comfort of home to my experience.

I hear with so many other painters, the words of Robert Genn, go to your room. I will pour a second cup of coffee and comply, at least until the afternoon sun says something different.

One thought on “sharing space”