In the snowy bits of January, I noticed the pair of eagles were back perching near, occasionally sitting in the giant nest close to my home.  I wondered if they were last years parents returning. By March I delighted in their frequent visits both near the nest and on my tree line. Several mornings I woke to the sound of eagle speak in my trees and started the day standing in the cold,watching in wonder. I couldn’t leave until they did, for fear to break the spell.

In March nesting seemed well underway. There was a giving of gifts, sharing fish at the nest, grooming on branches nearby, it seemed certain eggs were in the depth.

One day I didn’t see the pair, but thought little of it, one may be low in the nest, or on a fishing trip, it wasn’t uncommon to have my times not match theirs. The next day still I noticed only one. I stayed a long time but saw no signs the second bird. The third day, still one eagle. I started researching what might happen to a pair or nest to cause it to fail. A cell tower is a new installation quite near the nesting site that was built against local wishes in the fall last year. I worried at the time (and still wonder)  if it might impact the nesting site. 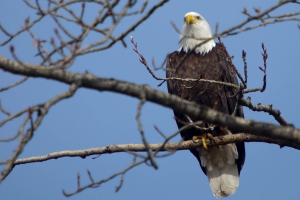 We had a terrible windstorm between when I saw two and then one, the nest itself seemed smaller with more air between branches. It is possible one of the pair could have been pushed into the power lines in flight,  I walked a good distance shore line looking for signs of a distressed bird, I got the car and drove looking for new nesting sites but found nothing.

I still see one adult, and sometimes he / she is in the company of a juvenile with incomplete head feathers. Eagles mate for life unless one is lost or sometimes if there are repeated failed attempts at successful reproduction. A pair of Canada geese are in the nest for the time being. All of my supposition doesn’t give clarity.

There are worlds we can bear witness to, we can learn bits of the language and through repetition of behaviors seen, reading and conversing with those in the know, we can build our own understanding yet there are stories and secrets we will never unravel. It is conversely one of my most and least favourite things about being in wild places. I can continue to learn, but I will never truly know. It is a constant practice in letting go.

2 thoughts on “watching and waiting.”